For RoadandTrack.com – September 17, 2013 / Photos by Al Vinjamur and Roger Garbow 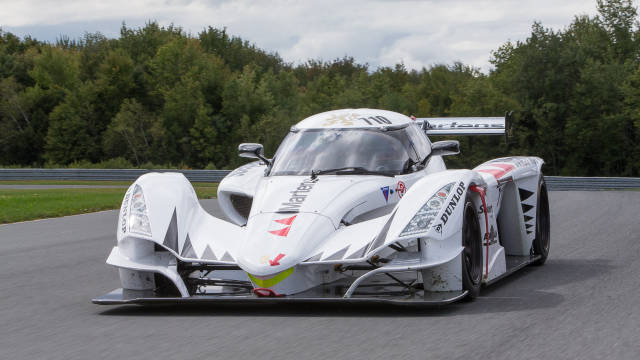 The Praga R1 sat sideways at the entrance to Monticello Motor Club’s main straight, engine burbling, as I pushed buttons, pulled paddles, and regretted not paying attention to the instructions for selecting reverse. After a good (rather, not-so-good) 90 seconds of fumbling, I gave up, popped it into first and drove through the grass to get back under way.

The spin occurred halfway though my first lap and was attributable (no, really) to cold slicks and wet curbing. Only slightly unnerved, I completed that lap and two more before pulling into the pits. Praga CEO Dušan Malý felt the front tire. “You need to go faster,” he said, “to get more heat in the tires.” “Sure thing,” I said, thinking of all those wet spots waiting to spin me. I headed back out, cautiously determined to push harder.

Brand new to the U.S., the Praga R1 is the latest weapon in the track-machine wars. Looking like a scaled-down LMP1 endurance racer, the R1 features a gorgeous carbon fiber monocoque. The fully enclosed cockpit has been crush-tested to withstand 19,000 lbs of pressure, offering drivers of all levels a comforting degree of safety. To demonstrate the coupe’s strength, Dušan routinely stands on the roof. Open-top track rides, like those from Radical, Wolf and Caterham, might be more appealing to drivers who are claustrophobic or want a more visceral experience, but I prefer to be wrapped in a carbon fiber cocoon. 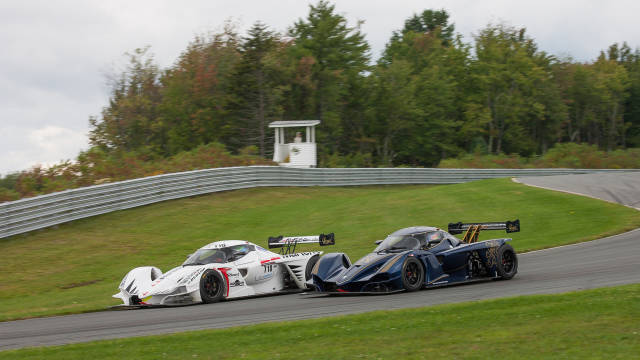 The 1300-lb R1 is built in Slovakia and powered by a low-maintenance, 2.0-liter Formula Renault engine generating 210 hp and 220 lb-ft of torque. That’s enough to push the car to over 160 mph. The engine output may not sound like much, until you consider the body generates a remarkable 1900 lbs. of downforce, 1.5 times its weight. So, while the R1 may not be the fastest car in a straight line, it slays corners better than any other car I’ve driven. Max cornering grip is measured at 3 Gs, compared to the Radical’s “mere” 2.5. While their approaches are very different, the higher-horsepower Radical SR3 and Praga R1 generate similar lap times. With all that downforce, braking is off the charts, too, allowing a brave driver to go to the 1.5 mark before jumping on the binders.

The Praga is low, with a height 40 mm shorter than the open-top Radical. The engineering, detail and craftsmanship are truly impressive, worthy of world-class companies like McLaren or Porsche. Need to adjust the pedals for different drivers? It’s a quick task, accomplished with two fittings behind the nose cone. The engine and Hewland six-speed sequential gearbox are easily accessible as well, although service intervals are so high—up to 15000 km between engine rebuilds—you needn’t worry. The center-mounted single Kevlar halo seat can be quickly switched out for a double, to allow for rides with an instructor or to scare the crap out of your friends.

While the name may not be familiar to most American enthusiasts, Praga has an excellent reputation in Europe and has been building championship go-karts and other race cars for years. Dušan said he was aiming to make ownership and use as easy as possible. Unlike many dedicated race cars, the R1 doesn’t demand a crew. Just bring along your kid or a friend to help with your belts and check tire pressures.

While the R1 is a perfect track-day car for the wealthy enthusiast, the company has also been racing them successfully in Europe. In addition to running against Radicals and similar machines in the U.S., Dušan is looking to start a single-marque series as well. At $159,000, the R1 is not cheap. But, considering the safety, engineering, and stunning beauty of the car, it seems a fair price. Best of all, it was designed to easily accept other engines. So, if you ever outgrow the stock 2.0-liter, more power can easily be installed.

Video of the Praga in action by Roger Garbow:

Back for my second session, I was joined by Praga’s test and development driver, Danny van Dongen, on track in another R1. The Dutchman has upwards of 1,000 hours in the cars, so I was glad to have a few laps with him to pick up some tips.

I’ve driven race cars with lots of mechanical grip, including the Viper ACR-X, but this was different. With mechanical grip, you push to the limits of adhesion and back off a hair. With a high downforce car, you have to go even faster to create more grip. It’s counterintuitive—but amazing once you get there. I was able to carry much more speed through Monticello’s carousel, and I began to feel like Allan McNish at Le Mans. McNish and I are about the same height, but I assume he has a nice custom-fit seat. I, however, needed an extra seat pad for a bit more visibility over the wheel.

The clutch is used only to start and stop, so while driving, left-foot braking is the norm. The paddle shifters are large and mounted to the carbon Cosworth steering wheel. A row of lights across the top of the wheel lets you know when to shift, but with a 7500 rpm redline, you are running a lower gear than typical through the corners. The shifts are lightning-fast and there’s a nice blip on downshifts. 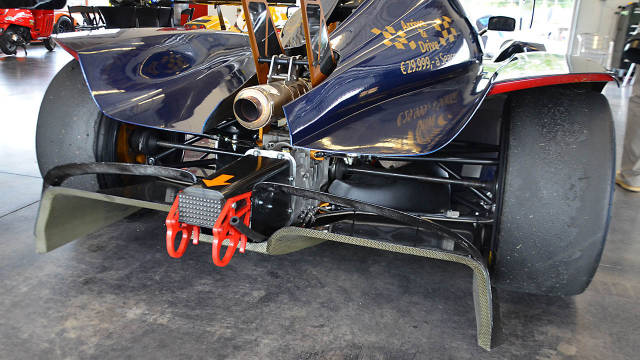 As if the R1 needed more of a cool factor, Red Bull recently invited Dušan to bring the cars to the Red Bull racetrack in Austria. There, they were turned over to three guys who know something about performance: WRC Champion Sebastian Loeb, F1 star David Coulthard, and the ultimate adrenaline junkie, spaceman Felix Baumgartner. I was tempted to ask if they needed to modify the seat to accommodate Baumgartner’s gargantuan balls.

After my two sessions, I needed to turn the wheel over to some Monticello Motor Club members, who, unlike me, can actually afford the R1. If I were them, would I buy one? You bet your zadok! I may not drive like Loeb, or Coulthard, or McNish, but the R1 makes me feel like I could.

About the Author: burnout